Archery season for 2016 came to a conclusion last Sunday, September 25th.  The month of September has long been a favorite month of mine, with October being a close second.  There are so many things about the harvest season to look forward to during the rest of the year and when those things actually start happening there’s never any disappointment…except for when they’re done.  Between the garden and orchard bounties and getting to hunt elk, what’s not to like?

The weather was pretty warm overall but we were blessed with some mountain snow a week ago and there aren’t too many prettier sights to behold than fresh snow on the mountains along with oak brush and aspen showing off their fall colors.  I was able to get out for a few days to do some solo backpack hunting and was fortunate enough to kill a healthy, fat cow elk.  The evening prior, I had bumped a nice bull with a couple cows out of a creek bottom so I headed there the next morning hoping to hear that bull throw out a bugle that I could move on.  The cow I shot came in with a group of cows and calves (no bull that I was aware of) from behind me about a minute or so after I had thrown out a couple bugles of my own.  The shot was broadside and exactly 20 yards.  From the time I first saw her pop out of the alder brush to the time I shot took about 15 seconds if I had to guess…it can happen so quickly sometimes.  She went about 100 yards up an aspen cloaked hill, then sidehill behind a pocket of spruce trees and laid down.  After waiting a good 30-40 minutes I walked the blood trail out and found her. 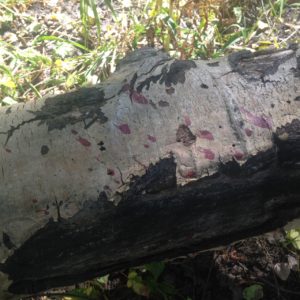 Those moments are extremely difficult to put into words and trying to accurately do so would result in a book…and even then I’m not sure it would convey things properly.  While taking the life of any animal is serious business that demands respect, it seems like the bigger ones hit me harder.  Elk are big.  They are extremely beautiful, they live in beautiful places and knowing that I just took one out of its current existence has significant weight to it, every time it happens.  However, the meat that I know is there under that brown and tan hide is ultimately why I’m out there. Procuring a year’s worth of meat for us while at the same time trying to fit in to a world that doesn’t care whether I’m there or not but it’s one that I want to be a part of so badly as much as I can.

It was hot that day and the flies and hornets were on the cow’s body in no time at all.  I spent that day packing meat back to camp and then the road and finished the last two loads including camp the following morning.  Now the meat is packaged up and in our freezer, having used the new grinder for the first time.  We had an incredible dinner of elk’s heart as the main dish a few nights later.  A piece of tenderloin is thawing in the fridge now which we’re looking forward to eating.  We let this elk age over a week in the cooler so hopefully it’ll be even more tender.

Bottom line, it was a great archery season here in western Colorado.  Rifle season starts in about two weeks and that’s when Timber to Table gets a little busier.  Looking forward to October (and November) and the upcoming opportunities to help put more good meat in the freezers of the folks coming to hunt with us. 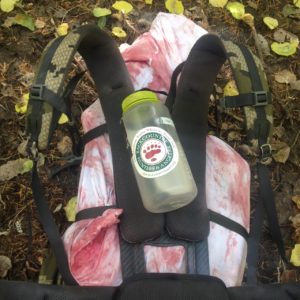