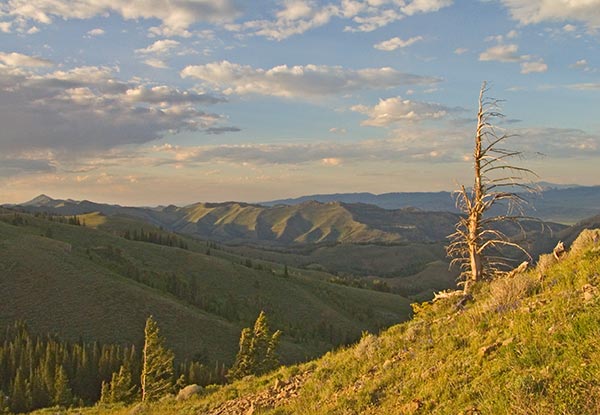 When I was a child we’d often drive from Rexburg to Yellowstone National Park. By the time I was about 5, I knew all the roads and junctions in the park. Yellowstone was my earliest most favorite place.

Yellowstone was the world’s first national park. Created by Congress in 1872 from the public domain before there even was an Idaho, Montana, or Wyoming, it was the beginning of an idea that spread around the world. Look on Google Earth to see the thousands of national parks worldwide.

“America’s best idea. . .” this much-quoted phrase refers to the national parks and monuments, our 80-million acres of national beauty. But this fact is 180 degrees from the outlook of the recent armed occupiers of the Malheur National Wildlife Refuge in Oregon. Oddly their beef seemed to be more with President Theodore Roosevelt a hundred years ago than today’s government. More threatening than these defeated militants is the effort traced to front groups of the mega billionaire Koch Brothers like the American Legislative Exchange Council, or ALEC, and Americans for Prosperity. They’re using unlimited money trying to stir up confusion and resentment toward one of the best things in the West — our public lands — trying to convince Westerners that they have too much freedom.

When politicians shut down the federal government during intense policy disputes, the first thing the media often shows are shuttered gates of a national park or monument. Americans love them. They want the parks open. When those who would sell off our public lands speak, they make assurances that “no important land” will be touched, only “surplus lands.” That the national parks will not be touched is false assurance. They lie by omission. They don’t mention the 500-million acres of public lands not in the national park system — the BLM lands, national forests, and national wildlife refuges. Yellowstone was the start of the idea that came to fruition 104 years later. Americans should possess not just private property, but public land too, and not just pending its disposal. Disposal of the public domain was ended in 1976 with passage of the Federal Land Policy and Management Act (FLPMA — flip’ ma). FLPMA repealed almost all the earlier land disposal laws like the Homestead Act. The remaining public domain would remain as the BLM lands.

Congress made Yosemite the second national park, but most of the early parks came indirectly by way of President Theodore Roosevelt (TR). He used the power of the Antiquities Act (1906) to create many national monuments out of the public domain by his proclamation. TR really went to work. He also used his presidential power to begin what became the national wildlife refuge system and most of the national forests too. Many of his national monuments later became national parks by acts of Congress.

Forest Reserve Act of 1891 gave the President power to set aside forested parts of the public domain as “forest reserves.” At the time the American countryside was reeling from unrestrained logging on both the public domain and private lands. Erosion following uncontrolled timbering had destroyed watersheds, streams, harbors. Many forest fires burned among the chaotic piles of logging debris (slash) left behind on logged then abandoned cut-over lands.

A few forest reserves had been established in the 19th century by Presidents Harrison and Cleveland, but then came TR, embodying the spirit of scientific forestry. He acted boldly and gleefully proclaimed 150-million acres of forest reserves from out of the public domain in the West. During TR’s administration a law renamed these reserves, “national forests” and also took away his authority to create more. The U.S. Forest Service was created to manage the national forests.

Our national forests are managed under the principle of “multiple use” and “sustained yield” (MUSY).

On private land, owners can do what they want (with some limits). National forest management aims at MUSY — many uses are permitted and planned for. Trees and range (forage) are treated as renewable resources, not one time gifts of God or nature. Trees are cut at a planned rate and replanted if necessary. Livestock are in theory limited in numbers and grazing season so that the range will be renewed each year. Participation of the public is sought by legal mandate. While actual practice does not always reach the standard, MUSY is much more democratic than private property decisions.

If you tell the Forest Service that you want information about their forest planning or specific kinds of forest management projects, they oblige. Before the web, they would often mail to you massive amounts of paper documents to study for your comments.

The U. S. Bureau of Land Management

The BLM was set up in 1946 by President Truman after a congressional standoff killed the U.S. Grazing Service. The BLM lands were the leftovers of the public domain after the national parks, forests and wildlife refuges had been created from it. BLM lands are usually drier and lower elevation, often desert, more often semi-arid land. Some called them “the lands no one wanted.” The character of these lands made it so they could not be homesteaded or privatized by other schemes. Once ignored by the public, these lands are obviously wanted today. At one time they were used almost entirely for livestock and mining. But as Western America grew and prospered millions took to our free and open public space on the BLM lands.

When Congress passed FLPMA in 1976, the BLM became permanent just like the BLM lands. It had a multiple use mission too. As former Secretary of Interior Cecil Andrus said, the BLM would no longer informally mean the bureau of livestock and mining.

This land system is the one that has many lands (wildlife refuges) outside the West. Once again, it was started by TR ordering protection. It has grown from tiny Pelican Island, Florida, to 583 refuges and 82-million acres of land and inland waters.

The refuges were created from the public domain, but also from private lands that were purchased by the U.S. Government, donated, or given to the federal government by local governments because of private abandonment (mostly during the Great Depression). Most of the land purchases have come from the Duck Stamp revenues, an 11 percent tax on firearms and ammunition and a tax on sport fishing gear, motorboat fuel and related items. Did Ammon Bundy even know that most of the Malheur National Wildlife Refuge was purchased with money from shooters, hunters, and anglers? Facts like these are why we all need to learn more about our public lands.

Sixty-two percent of Idaho remains U.S. public land. Unlike back East, down South, or the Plains states, we don’t have to beg big landowners if we want to explore the land, to ride, fish, hunt, hike, camp or climb. A growing number of power brokers just hate that average folks still have this kind of freedom. Bundy and the Koch Brothers have their heads screwed on backwards and guns pointed in the wrong direction.

Dr. Ralph Maughan is professor emeritus of political science at ISU. He retired after teaching there for 36 years, specializing in voting, public opinion and natural resource politics. He has written three outdoor guides, including “Hiking Idaho” with Jackie Johnson Maughan. He was a founder of the Greater Yellowstone Coalition.