Guiding for Black Canyon Anglers down in the Gunnison Gorge offers the opportunity to see some of the most amazing geology in the lower 48, be on a beautiful river full of brown and rainbow trout and, during the month of June, witness the spectacle of the stone fly hatches.  It can also be wicked hot but that’s not what’s important.

The Gorge experiences three main stone fly hatches.  In order of size from biggest to smallest they are the salmon fly, golden stone fly and yellow sally stone fly.  Salmon flies can be up to 2 inches long, goldens an inch or so and yellow sallies are about a 1/2 inch.  When they emerge from the water in their nymph stage they typically crawl up the grassy banks, or more often, up the numerous rock walls and cliffs the Gorge is famous for.  There they climb out of their exoskeletons, allow their wings to stretch and dry and take to the air to go look for some buddies…preferably one of the opposite sex.  They are in this adult stage only to mate and usually around 9 or 10 am, if it’s sunny and warm, they’ll take to the air en masse and during the peak the sky is literally filled with thousands and thousands of salmon flies, or sometimes yellow sallies or sometimes all three species.  Due to their sheer size, the salmon flies are the most dramatic while flying with the sun glinting off their four wings giving the appearance of floating diamonds against a backdrop of green river water, ancient black metamorphic rock walls and cloudless blue sky.

It’s impressive whether you fly fish or not. 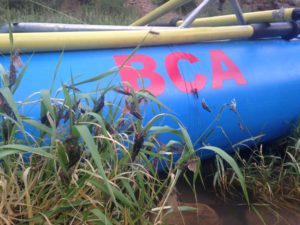 Of course the trout are pretty keyed in on the cornucopia of protein that the river suddenly produces for them.  They gorge themselves (pun fully intended) on the feast of all three stone fly species.  Hugging the rock walls and grassy banks, the big fish establish a position and hammer the insects.  For the fly caster who gets a properly placed dry fly tight up to these walls (“tight” sometimes being an inch or less away from the wall), they are rewarded with a lightning fast strike from a brown or rainbow ranging anywhere from 16 to 20+ inches.

Perhaps one of the coolest things about fishing the hatch are “splash marks”.  On the grayish black rock walls of the gorge fish will often leave a splash of water on the surface of the rock after they rise to the surface to gulp down a stone fly.  When a fisherman can spot one of these, it gets exciting real quick because you know a fish is actively feeding right in that spot.  If you can cast your fly just up current from that splash mark and present the fly well as it drifts down through the fish’s feeding lane, you may hook a monster.  It’s sort of like sight fishing without actually seeing the fish.  It’s similar to finding a freshly used elk wallow…you know what you’re after is close at hand, your focus really intensifies and it’s fun! 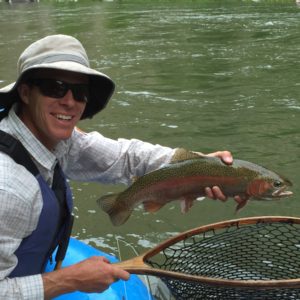